Back to School with Distance Learning? Visit our Help Center 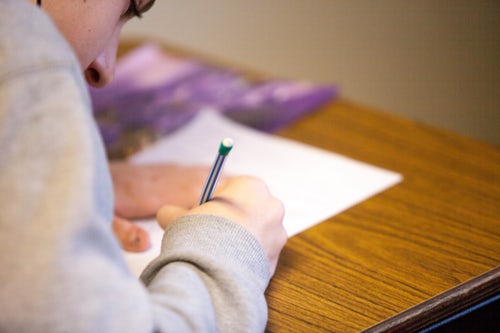 Before I became an ASSISTments user, grading exams was an absolute nightmare. Just as time consuming and tedious as homework grading, exam grading had the added stress of impacting student grades. To ensure I was grading fairly and consistently, I reviewed my red pen marks over twice per exam. The exam grading process could easily eat-up an entire weekend.

All that changed when I started using ASSISTments for benchmark tests. ASSISTments is commonly thought of as a formative tool: something that teachers can use to track student progress on a regular basis through homework. But I am here to tell you about a different awesome way ASSISTments can be used in your class, benchmark tests!

‘Benchmark test’ refers to any test or exam that tests a student’s mastery of a subject. While homework assesses how students are progressing, benchmark tests allow teachers to see what students have learned at the end of turning point of a unit.

I love giving exams through ASSISTments because of the flexibility of the system, the ease of grading and the way it has transformed exam review sessions. ASSISTments is very flexible, so you can build whatever type of test you need. Teachers can build an ‘assignment’ exam using ASSISTments questions, modifying ASSISTments questions, or starting from scratch and creating an entirely new problem set. This allows me to tailor an exam so it perfectly matches the content that I am trying to test.

Instead of grading by hand, I have now grown accustomed to the convenience of benchmark tests with ASSISTments. While I test students, I turn on ASSISTments “test mode”. This prevents students from seeing hints and feedback during their exam. After the exam has finished, I let ASSISTments do the grading by running an Item Report. Just like the reports you receive assigning homework, ASSISTments provides Item Reports for exams as well. Before they adopted ASSISTments, my colleagues always used to wonder how I was able to grade exams so quickly. The trick is that I wasn’t grading exams, a computer was able to do the grading more quickly.

Additionally, using ASSISTments for benchmark tests has made exam reviews much more productive. Instead of kids raising their hands to argue points with me, my students are now more concerned with why they lost points on a problem. They know they can’t argue with a computer algorithm!

Saving time grading exams has allowed me to take the much-needed weekend break, even after an exam. I use the extra time to recharge and to prepare lesson plans for the coming week. All in all, using ASSISTments has made the exam process much smoother and more efficient. I encourage you to try it out in your own classroom and let me know what you think!

Return to the Blog

Starting a new business? Then Unpack is for you!Etiam vitae tortor. Vestibulum ullamcorper mauris at ligula

Thank you! Your submission has been received!
Oops! Something went wrong while submitting the form

Back to School with Distance Learning? Visit our Help Center

The ASSISTments Foundation is a 501(c)(3) non-profit organization sponsored by Worcester Polytechnic Institute.

The ASSISTments Project @ WPI is led by Professor Neil Heffernan and Cristina Heffernan, co-founders of the non-profit.
‍
Worcester, Massachusetts

Send Us A Message